Indian Sandstone: The Rock with Multiple Benefits and Qualities

Red Sandstone
The oxides of iron and copper give the Indian sandstone slabs its characteristic pink and red colour. The haematite ore is the ingredient that makes the sand grains appear like red dots and mottled carpet. The light pink colour can be achieved by artificially introducing pigments into the layer. The red-bed of the Indian sandstone quarries also contains small traces of Lithic Sandstones. The Lithic sandstones impart the dark brown shade to the slabs. The volume of Lithic sandstone concentrations range between 4 per cent to 9 percent in most red bed quarries. 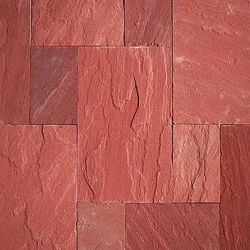 Road filling material
The grains made from grinding the Indian sandstone slabs are used as a road-filling material. It is also used in manufacturing high-grade concrete and filler.

Glass making
The sandstone slabs are rich source of quartz. The silica is extracted from the slabs and then used to manufacture glass. Semiconductor chips and carborundum are also made from the Indian sandstone slabs.